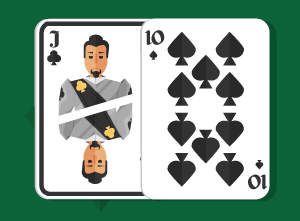 JT and JTs are fringe hands in that they are just good enough to play in some situations, but very dangerous to play in others. Most of the value with these hands comes from hitting a straight, which you will often have to draw to on the turn and river, so you need a game where many players see the flop so the pot odds are correct to see the turn and river.

Neither of these hands play well heads up, and against the best players, you will have to pay too much to see the turn and river so it is best to fold before the flop. These hands can be very costly in no limit Texas holdem, so I usually avoid them, especially in early and middle position.

One situation that it is possible to do well with these hands is when you pair one of your cards in combination with a straight or flush draw. For example, if the flop is 8 9 J, you have a pair and a redraw to a straight. I like to play these hands very aggressively until an opponent convinces me that he/she has a better hand. The only hand that I am scared of in this situation is QT. What I hope for is someone with KJ or AJ who will pay me off when I complete my straight or hit two pair.

In a limit Texas holdem game that has many players to the flop without much pre flop raising, I will limp with JTs around 50% of the time. In all other situations I fold both the JT and JTs from early position.

When the pot has not been raised, I play both the JT and JTs most of the time in low limit games and in the lower no limit games. I still avoid these hands in the bigger no limit games, because it is often too expensive to see the turn and river and in the higher limit games most hands are contested with only two or three players, so it is rarely worth entering the pot.

In limit play, I will usually see the flop for a single raise with both JT and JTs, but only if it looks like many opponents are coming with me. Remember that these hands do not play well heads up and you will be out of position the rest of the hand. In no limit play, I fold to a raise most of the time.