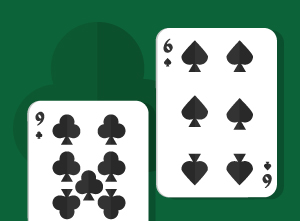 With the exception of 96s and 96, these hands are completely unplayable everywhere but the big blind. The unsuited hands below 95 cannot form a straight, and 95 will never form the best possible straight. Even the suited hands are very weak, because when you do hit a flush it will be evident that a flush is possible and there are many higher flushes possible. So if you do get any action after hitting a flush it will be very likely that you are beat and lose a large pot. These types of situations, especially for new players, are to be avoided at all costs.

Though it does say in the opening above that 96s and 96 are the exceptions, I don't play the un-suited hand except in the small and big blind. The 96s can be played when there hasn't been a raise and there are many people in the pot. You must have many players to make the pot odds correct to play. You will not win a very high percentage of the time when you enter the pot, so the pot must be large enough to make up for the losses when you do win. When you don't flop at least a pair and a backdoor straight or flush draw or better, you must fold to any pressure. Please note that an open end straight draw and four-to-a-flush qualify as better than a pair with a backdoor draw.

In limit Texas holdem, I usually call half a bet in the small blind with 96 and 96s, but not with any of the other hands. In the big blind, if there has been a raise, the 96s is playable only if it looks like at least three other players will stay to the flop and the raiser is loose. Otherwise, it should be folded. All of the other hands should be folded to a raise. Also, I do not play any of these hands from the small blind or for a raise in the big blind in no limit Texas holdem.