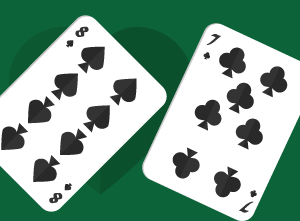 Most of the advice contained below will be about 87s, as it is a much stronger hand than 87. The only positions that I play 87 from are the blinds because it can't be played for a profit elsewhere. In addition, these hands are not playable in no limit Texas holdem outside of the blinds. They will rarely form the best possible hand, making them trap hands. A trap hand is one in which you make the hand you are drawing to, but lose to a better hand. When this happens, you tend to lose a large pot, often your entire stack in no limit play.

The power behind a hand like 87s comes when you flop a strong draw or a combination hand. A combination hand is one where you have draws to more than one winning hand. For example, on a flop of 5 6 Q with two cards of your suit, you have an open-end straight draw and a flush draw. If none of your opponents hold two cards of your suit you are a favorite to win this hand even though you don't have a made hand at this point. Another example of a strong combination flop is 5 6 8. You have top pair and an open-end straight draw.

These are the types of flops that will allow you to play the hand aggressively and win large pots. To play 87s profitably, you must have the discipline to fold when the flop does not provide a situation like these. A flop of 8 J Q is terrible for you, even though you do have a pair. You may be drawing dead, but even if you aren't, any card other than a 7 or 8 on the turn and river most likely will not help you.

I do not recommend playing either of these hands from early position.

I don't play either of these hands from middle position either. 87s can be borderline playable in games with no pre-flop raising and five or more players to every flop, but even in these games you will go a long time between winning. On the positive side, when you do win a pot it will tend to be very large.

87s can be played from late position, but only in unraised pots. Once again, it is advantageous to have many players in the pot for the correct pot odds. I rarely play 87, as the only real chance of winning is to flop a straight draw or two pair.