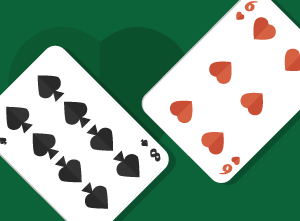 If you have been reading the hand suggestions, you have probably noticed that most of them cover at least two hands together, but this is only for one, the 86s. This hand stands alone because it is playable in places other than the big blind, while the non-suited version is not, so it is covered elsewhere.

Don't mistake the above statement as saying that 86s is a very strong hand. It is one of the weakest hands you will ever play in Texas holdem, but if played in the correct situations it can be very profitable. The main reason for this is that it will always be a very well disguised hand when you do play it. Unless you consistently play poor hands, none of your opponents will expect you to turn this hand over at the showdown.

I rarely play 86s in limit Texas holdem, because it is often difficult to build the pot to a large enough amount to make it profitable. The only situation where it can be played is from late position when at least three players have already limped into the pot. At least one of the blinds, and probably both, will come in behind you, giving you at least four opponents. It is important to realize that even in this situation, if the flop does not help you a great deal, you must fold to any action. Just pairing one of your cards is not enough to continue with the hand.

No limit Texas holdem is where this hand can be very profitable, if you learn the best places to play it. These situations will only come up a very small amount of the time, and you need to be very disciplined and careful. You must be in late position, preferably on the button, and be playing against opponents who will let you enter the pot for a very low price, but go too far with their hands after the flop. Notice that you don't have to have many opponents in the hand with you, as no limit play allows you to win a large pot at times against one or two players.

A good example of this is when a player in early position, who you have noticed slow plays their large starting hands, limps into the pot. Many flops that will appear to not help anyone can improve your hand and let you win a big pot, because they will overplay their big hand after the flop.

I do not recommend playing 86s in early position.

I also do not play this hand from middle position.

Please see the explanation above for correct play in late position.

In both limit and no limit Texas holdem play, it is correct to call half a bet in the small blind. I do not recommend calling a raise in either blind.