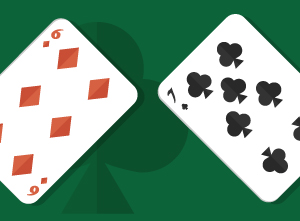 As it is small suited connector, 7-6s can be played for a profit in certain situations. It is important to realize that these situations don't come up very frequently and you need to be disciplined and careful when they do. Because of this, if you decided not to play 76s at all while you were gaining experience, it would not be incorrect.

For example, against an early position player with AA or KK, I don't want to play 76s in limit Texas holdem, because even when I do hit my hand, I won't be able to maximize my winnings. On the other hand, if I can enter the pot for the right price in no limit play, I have a chance to win a large pot with a favorable flop.

I hope to hit two pair, an open-end straight draw or four to a flush on the flop. An open-end straight draw in combination with four to a flush will usually make me a favorite to win the hand. Here is the most important point on this page. If you don't improve on the flop, you must fold to any bet. It is not profitable to chase a long shot draw. In addition, even if you pair one of your cards, you must be disciplined enough to fold to a bet. A small pair rarely wins at showdown in Teas holdem.

I never play 76s from early position in limit or no limit Texas holdem.

In limit Texas holdem, I don't recommend playing this hand at any time from middle position. As you gain experience and become a stronger player, you may be able to play it from middle position in no limit play. In order to do this, you must have a very strong indication that your opponents who will act behind you will not raise.

Late position is the most likely place you will be able to play 76s. In limit play, you need many opponents already in the hand with no raises. Because you won't hit your hand very often, you need these extra players in order for the pot to be large enough to pay you for all the times you will need to fold after the flop.

In no limit play, you only need one or two opponents and you can often call a small raise. Your opponents must have deep stacks and show a willingness to get all of their chips in the pot. If they are good enough to fold when you hit a hand, it will not be profitable to play in this situation.