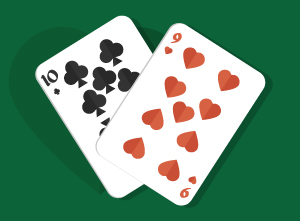 T9 and T9s are not very strong hands in either limit Texas holdem or no limit Texas holdem, but they are both playable in certain situations. The majority of any long-term profit that you are able to accomplish will be from winning big pots with a straight. In addition, it will be difficult for your opponents to determine that T9 is the hand you hold, as it isn't one that is played by many players.

Though the T9s will help form a flush, you need to be careful when you do hit one, as there are four higher flushes possible. For this reason, if you do flop a flush draw, if it isn't in combination with at least a backdoor straight draw, you need to proceed cautiously.

These hands can be very profitable when they flop a combination draw. When this happens it will allow you to play the hand aggressively instead of passively, leading to higher long-term profit. A quick example is when you have T9s and the flop is 3 8 J with two of your suit.

I do not recommend playing either of these hands from early position. As you become a more advanced player, you may recognize a very rare game where you can limp with T9s from early position, but this is very rare. The game would have to have many players, at least 5 or 6, to every flop without a raise. Even in this situation it will be difficult to make any consistent profit so you are best to fold.

Play these hands from middle position the same as you would from early position. If you are still learning the game, it is best to avoid these hands anywhere but late position and the blinds.

Though you still have to be careful, you can play both of these hands at times from late position. Of course I am more likely to play the suited hand than the non-suited one, but late position allows you to manipulate the play after the flop to some degree, so you may be able to draw inexpensively to a straight on the turn and river. I don't recommend playing either of these hands when an earlier player has raised. Calling a double bet will not be profitable in the long run.

If the pot has not been raised, I call the half bet from the small blind. I also will at times call a single raise in the big blind in a limit Texas holdem game. My hopes are to flop a combination hand and be able to play the hand aggressively.