Playing T8, T8s and below in Texas Holdem. 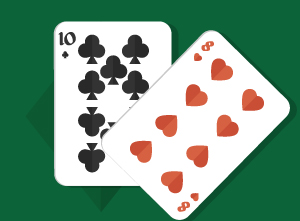 I always suggest to players who are learning Texas holdem to avoid hands like T8s and especially T8. These hands rarely make the best possible hand so they must often be played passively, and at times when you hit the hand you are drawing to, you may still lose. Both hands tend to play better in multi-way pots, as you will need a great deal of money in the pot the few times you are able to win to offset the high percentage of times that you don't win.

Folding T8 from every position but the big blind in unraised pots would not be incorrect, especially while you are learning the game. Likewise, folding T8s everywhere but late position and the blinds is best as you gain experience. As a side note, if you read or hear the term suited connectors, the T8s is an example of a one-gap suited connector.

I don't recommend playing either T8 or T8s from early position in Texas hold3m, either limit or no limit.

Like early position, neither of these hands can be played profitably from middle position, with the exception of T8s in a few low limit Texas holdem games. In limit games where five or more players regularly see the flop without any raises, T8s can be played profitably if you are disciplined enough to fold if the flop doesn't improve your hand. You would prefer a flop that gives you a strong straight and / or flush draw, because the pot odds will be much higher than necessary in order to see the turn, and often to see the river.

In no limit Texas holdem, you should avoid these hands in late position until you gain quite a bit of experience. Both hands can be trap hands so you must develop the discipline to fold after the flop, even with hands as strong as two pair at times. This ability will only come with experience.

In unraised pots I recommend calling the half bet in the small blind and checking in the big blind. In limit Texas holdem, you should fold to a raise from both blinds with T8 and depending on how loose the raiser is; consider a call from the big blind with T8s, but fold from the small blind. Both hands should be folded to a raise in no limit play.