Playing T7, T7s and below in Texas Holdem. 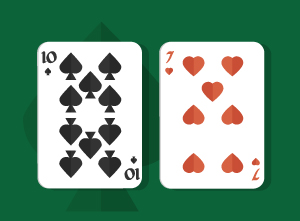 T7, T7s and all the hands below are very weak in all forms of Texas holdem. They are completely unplayable in all but the best of situations, even at the lower limits and against poor competition. As you are learning to play and gaining experience, I suggest folding all of these hands everywhere with the exception of the big blind in unraised pots. Even when you do get to see a flop, you should look for reasons to fold, not continue with the hand.

The very least I want to improve to on the flop in order to continue is an open-ended straight draw, two-pair or four to a flush. In a no limit game, I will even fold four to a flush to much pressure from an opponent. Notice that because the hands below T6 can't form a straight, they are completely unplayable. In the case of flopping a flush draw; there are four possible higher flushes with the Jack, Queen, King and Ace, so even hitting a flush may lose you a large pot.

For all of the reasons listed above, the advice contained below is slanted towards players with some experience, but it would not be incorrect to ignore the suggestions and just fold these hands at all times.

Do not play any of these hands from early position in any game or in any situation. You will not be able to turn a profit over time.

Play from middle position is the same from early position. These hands cannot be played for a profit in any game or at any limit.

The only hands I play from late position of this group are T7s and T6s. I do not play either of them in no limit games and I will not call a raise with either of them. In addition, I want at least three other players in the pot, preferably four or five. There has to be many players in the pot in order for the potential profit to make up for the large percentage of the time I will have to fold after the flop.

I don't recommend playing from the small blind in no limit Texas holdem with any of these hands. Even calling half a bet in an unraised pot will not be profitable. I do usually call the half bet in limit play with T7s and T6s, but none of the other hands. In the big blind, only in limit play, depending on the looseness of the raiser, I may occasionally call a single raise with T7s, but once again, I want many players in the pot, especially ones who will pay me off all the way to the end of the hand when I hit. Never call a raise with any of these hands from any position, including the blinds, in no limit Texas holdem.