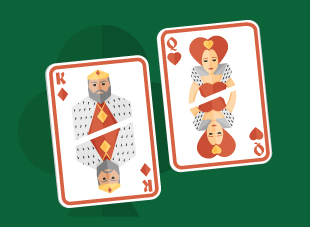 KQ and KQs are very strong starting hands in both limit and no limit Texas holdem, but not strong enough to withstand too much pre flop pressure, especially the non-suited hand. This is one of the hands that I tend to play more often in limit play than in no limit play due too the fact that when you hit a part of your hand on the flop it will often open up straight draws to your opponents with strong hands and there is always the chance an opponent may have AK or AQ so when you hit top pair you can be out kicked. Each section below will have separate advice for limit and no limit play.

KQ and KQs should be folded in no limit play from early position. There is too great of a chance that the pot will be raised behind you and you will end up playing against a strong hand from out of position. In limit play, both KQ and KQs can be played from early position, but in a game with many solid players I tend to fold the non-suited hand. The games that have five or more players to every flop with little or no pre flop raising can make KQ profitable, but most of the value will come from completing a straight or hitting two pair or better.

In limit play, if there has not been a raise, I always play both KQ and KQs, often entering the pot with a raise. If there is an early position raise, if the player is tight / solid I will fold the KQ and occasionally see a flop with KQs. If the early position raiser is loose, I may re-raise to try to isolate them, or I may fold if there are a few good players to my left. In no limit play, I often fold the KQ, always if there is a raise from early position, and play the KQs carefully. I want to see the flop for as little as possible. For this reason, if there are any players that are raising a great number of hands to my left, I will fold.

If none of my opponents have shown strength in limit play, I like to enter the pot with a raise from late position with both KQ and KQs. If there has been a raise, if the raise was from a good player I fold KQ the majority of the time but will call a single bet with KQs. If the raiser is loose, I will almost always call from late position, and at times re-raise to isolate them. In no limit play it also depends on the abilities of my opponents already in the pot. If no one has raised, I will usually enter with a raise from late position. If there has been a raise, unless the raiser is very loose I will fold KQ and play KQs about half the time.

I recommend seeing the flop in limit play, even for a raise. In no limit play, you should see the flop for a normal raise with KQs, but lean towards folding KQ unless the raiser is loose.