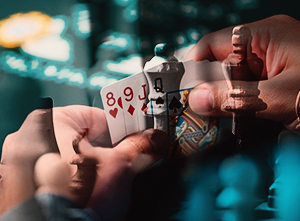 Though you don't find many multi table Omaha/8 tournaments, there are often sit-n-go tournaments running at many different price ranges. The two most important skills to develop when playing single table tournaments are solid patient play early and shorthand play late. This is magnified in Omaha/8 tournaments because the level of competition is so poor that solid play will often get you close to the money without much in the way of luck or advanced play. The rough part is getting from the “bubble” into the money and on to a chance to win.

Early in the tournament, play the same starting hand selections that you use for solid ring game play and don't take any unnecessary chances. You don't need to push small edges, as there is plenty of time to capitalize on your good hands. Also, regular Omaha/8 is a game of scoops but in tournament Omaha/8 scoops are doubly important. Splitting the pot is of little importance until later in the tournament.

Like most forms of poker, it is of great importance to observe your opponents at all times. Even in tournament play there will be many players who don't know how to play and/or don't understand the rules. It is your job to find these players and take advantage of them. Find players who chase a draw for half the pot and make them pay a premium price to do so. As you advance further into the tournament, the players who don't know the game well will be eliminated and the better players will advance. Omaha/8, with it's reduced luck factor, rarely allows a truly poor player to do well in a tournament.

As you get near the money and battle for position to have a chance to win, the most important areas to concentrate on are hands that have two-way possibilities and placing pre flop raises at the correct times. At this stage of most tournaments, most hands are played heads up. For this reason almost every hand you play should offer a low possibility, no matter how poor it is. I have won many low pots late in tournaments with 5 7 or even 6 8 as my low cards.

Many of your opponents will still be playing high only hands and when playing heads up often a low draw will be forfeited giving you a chance to scoop or at worst split the pot. Split pots become much more important in the late stages of the tournament as the blinds often are very large in proportion to the average chip stack. You will be forced to play hands that aren't great, so winning half the pot allows you to survive until your best hands come.

By observing your opponents, you can find the ones that may release their hands to a raise. Attempting to steal the blinds is a poor play early in the tournament, but a very good play late in the tournament. Both things in this paragraph work together well. When you are attempting to steal the blinds, try to do it with a hand that has low possibilities when you are called. You will also find that sometimes in heads up play the high hand will only need to be two pair or three of a kind. This is not the case in the early stages of the tournament where you will need a very strong hand to win, just like in most ring games.