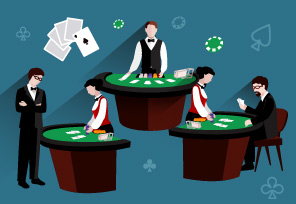 There are two separate areas of middle position play in the middle rounds that we are going to investigate. The first is when you have an average or larger chip stack and the second is when you are short stacked.

When I have an average or larger stack, I always try to look at my starting hand selections in a raise or fold light. If it is good enough to raise with, I will enter the pot, and when it isn't, I will fold. For example, if I have JJ and there hasn't been a raise in front of me, I will enter the pot with a raise. On the other hand, if an early position player has raised, I will fold the JJ, unless the player is a very loose raiser.

Though the blinds aren't extremely significant at this point in most poker tournaments, by raising, you have a chance to win them uncontested. Even though this isn't my goal, realize that if you just win the blinds uncontested once a round you will maintain your chip stack until you can work into a position to win a big hand. I haven't mentioned this much to this point, but one of the most important skills in poker tournaments is patience. The players that made it to the final few days in the World Series of Poker main event last year had survived six or seven days. This requires skill and an extreme amount of patience.

By playing this way, you won't become involved in pots when you have marginal hands and you will often have the opportunity to get away from hands where a late position player dominates you. For example, with QQ you raise from middle position. A late position player, who you know is very tight re-raises behind you.

The range of hands he or she will re-raise with is very small, probably AA KK and AK. Even though you will lose your raise, it is better to find out what he or she has now, so you can avoid losing your entire stack. This also will set up a play for later in the tournament sometimes. If the same late position player has re-raised you a few times and you have folded, if you are fortunate enough to pick up AA and make the same sized raise as before, he or she may widen their hand selection to try to steal your raise again.

When you are short stacked, middle position is where you need to start looking for strong double up hands. Just like the advice from early position, you should just move all in before the flop with your very best hands, like AA KK QQ JJ and AK. When you are short stacked it is likely one of the larger hands will call, assuming you are willing to gamble with much poorer hands.

One mistake that you need to avoid is when you have picked up a few big hands, moved all in, and everyone has folded and you just win the blinds. Many players will start limping with their best hands after this happens, trying to induce a raise from a late position player or the blinds. This is a tremendous error. Though it may seem like a waste of a big hand to just win the blinds, it allows you to survive another round. Limping with a big hand allows the blinds to see the flop and even AA will lose when the blind lucks into two small pair or better on the flop.