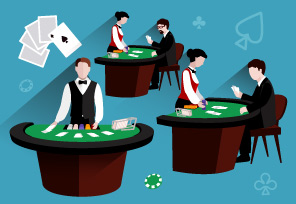 Your play from middle position in the early rounds of multi table tournaments is very similar to early position play with the addition of a few more playable hands. Your position has improved and you will have the additional information about the early position players’ actions, but you still have many players who will act behind you. This means that you still need to proceed with a great deal of caution and be prepared to release the weaker hands to a re-raise behind you.

In addition to the early position hands of AA KK and QQ, you can often play JJ AKs AK and AQs from middle position. I only recommend playing these hands when there has not been an early position raise. When you are facing an early position raise, you must assume the raiser has a very strong hand like AA KK QQ or AK. Even if the player has proven to play worse hands in the past, it is not worth taking the risk at this stage of the tournament.

When there hasn’t been a raise, you should enter with a standard raise of three to four times the big blind. This will force the blinds to fold marginal hands that may get lucky on the flop and also will provide you with additional information about any late position players who may call or raise behind you.

One important point I would like to make at this time is to be very wary of any solid player who flat calls behind you in this situation. They either have a monster hand like AA or KK or they are planning to take your entire stack with a hand like 88 or TT if they are lucky enough to hit a set on the flop. Do not over commit to the pot after the flop unless you are positive you have the best hand.

If a late position player re-raises, it is usually correct to fold all but the very best starting hands like AA and KK. Remember it is still early and you will be out of position the entire hand. This is a distinct disadvantage with marginal hands. If you do decide to play against a late re-raiser, I recommend pushing all in. This creates an additional chance to win the pot. You may win if they call, but you can also win when they fold to your all in bet.

When you enter with QQ and JJ, have a late position caller and the flop contains and Ace or King, you should bet into your opponent, representing an Ace, and fold if they re-raise. Realize that you have shown a great deal of strength by raising pre flop and betting on the flop, so if your opponent continues with the hand, you are probably behind.

If they call again on the flop, you have two choices. You can either check and fold to a bet on the turn and / or river or move all in on the turn. They either have you beat or are trying to steal the pot from you. The correct play depends on your read of your opponent.