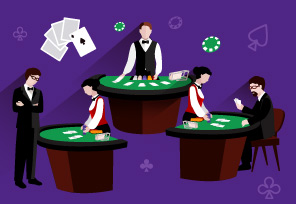 Late position in the middle rounds of a poker tournament offers one of the best opportunities to increase your chip stack, whether you have a large or small stack. The advantage of acting after the majority of your opponents and the ability to put the maximum amount of pressure on the blinds, when used correctly, can make the difference between winning a poker tournament and not even finishing in the money.

I still suggest a tight style of play when it comes to your starting hand selection, but by this time in the tournament, hopefully you have learned enough about some of your opponents to use your position as an additional tool. For example, if the blinds are weak, you can raise with a much wider selection of hands than normal when there hasn't been a raise in front of you. Also, often you will have an idea of the types of hands that early position players will raise with.

One potential trap area that you need to stay aware of is when you raise to put pressure on the blinds. Always consider what you will do if one of them pushes all in after you raise. In other words, don't bet so much that you are pot committed unless you are willing to call an all in from one of them.

The blinds are rarely large enough to be a large danger at this point in the tournament unless you are short stacked, and when this is the case you are better off pushing all in from late position than just raising, because you are pot committed already at this point. By pushing all in, you have the additional chance to win if the everyone else folds. If you raise, are re-raised, and must call an all in, you only have one way to win, by showing down the best hand.

When you have an above average stack, you can put pressure on anyone who wants to play a hand by forcing him or her to consider playing for his or her entire chip stack and tournament life when you are in the hand. This does not mean you should loosen your starting hand requirements, unless you have control of a player and can force them to fold. Remember that even poor players are dealt AA and KK just as often as you are, and they will not fold big hands.

The other area to consider is when you play hands against other big stacks. Position is very important in these cases, because going up against another big stack can either cripple you or knock you out of the tournament. You also need to understand if you are a better player than your opponent after the flop. Knowing this will change the way you play pre flop against them. For example, if a big stack raises from middle position and you have a hand like TT, you can fold because they probably have a better hand than that or call, hoping to hit a set on the flop and win a big pot, or raise to find out just how good their hand is.

If they are good enough to get away from the hand if you flop a set, then calling is a poor option. Little things like this are the difference between winning tournament players and the rest of us.