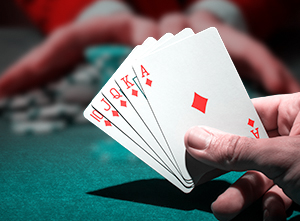 Many years ago, when I was attending college, we often played poker in the dorm rooms. At that time, no one played no limit Texas holdem or Omaha/8, as we didn't even know they existed. The most popular game where I was located was called high low or Acey Deucey. We would play for hours on end and had a great time. If you ever feel the need to try something different, I highly recommend trying high low, and I have included instructions on how to play below.

You use one or two standard 52 card decks and can play with anywhere from two to ten players. More than ten may play, but it gets quite crowded around the table. One player deals and each player antes a set amount. We always played with a quarter ante, but you can use any amount.

If the active player guessed correctly, they took the amount of the bet out of the pot. If they were incorrect, they put the amount of the bet into the pot. If the card was the same as the first card, the active player had to put twice the amount of their bet into the pot. Play then continued to the left until one player won the entire pot or the deck was depleted. When a player won the entire pot, everyone anted again and play started with the next player. Once the deck was depleted, the deal was passed. It is not uncommon to develop pots up to $200, even with a quarter ante.

The next time you have a few friends over and are looking for something to do, give this a try, even if it is only penny ante. I'm sure you will have an exciting evening.