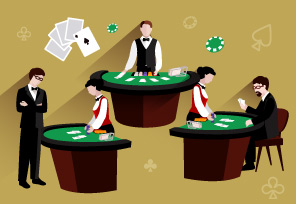 Once you move beyond the early rounds of a multi table poker tournament, a great deal of correct play involves the size of your chip stack, especially in comparison to the other players at your table. As you move deeper into the tournament and closer to a money finish, the size of your stack becomes even more important.

There are two schools of thought on middle position play with a large chip stack, playing more aggressively to force your opponents to risk their entire tournament in a confrontation with you, and tightening up your starting hand requirements more than usual and only play hands where you are in a dominant position.

I recommend the more conservative approach, especially from early position, but certain players do very well playing more aggressively. The main concern I have from an early position in the middle rounds is not to become involved in a trap hand. For example, even though a hand like QQ or JJ is very strong, I am reluctant to call an all in bet with these hands unless I know an opponent will move all in with a wide range of hands. Of course, if I can get all in heads up against a much smaller chip stack, I will do so with these hands. Players tend to push with a wider range of hands, as their stack gets smaller.

They reach a point where they have to double up to survive, so they will gamble with hands like A9s, or worse, in some situations. In addition, it is almost always better to be the player who moves all in, as opposed to calling an all in bet. By pushing, you have an additional way to win the hand, by forcing your opponents to fold. When you call, you have to show down the best hand to win.

My reasoning behind tightening up my starting hand selection in early position in the middle rounds, beyond avoiding traps, is when I have a fair amount of chips; there is no reason to be impatient. Until the blinds become a danger, there is no reason to gamble, especially when playing a hand out of position.

All of the discussion above dealt with a medium to large chip stack. When you find yourself with a below average amount of chips, you will need to find a hand that gives you a chance to double up before the blinds overtake you. Unless the blinds are of such size that they will cripple you within the next round, I do not suggest taking large chances from early position. In early position, you don't have any information about most of your opponent's hands. In late position, you have the information gained by the way they have played the hand so far, either folding, calling or raising.

One advantage of being short stacked in the middle rounds is many opponents will be aware that you need to double up and will assume that you will expand your starting hand selection when moving all in. For this reason, if you are fortunate enough to have a big hand like AA KK or QQ, you should move all in. It is likely an opponent with a larger stack will think you are desperate and call with hands as weak as ATs or TT. In other words, when you are short stacked, don't try any fancy plays with your monster hands. The last thing you want is to limp in hoping for a raise and end up with four or five people seeing the flop.