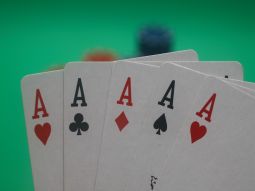 Valeriu Coca was a player in the $10,000 heads-up no-limit hold'em championship event, and after his fifth-place finish for over $54,000, there is some suspicion that he could have been cheating. While there is no concrete evidence against him at this time, there's a ton of circumstantial evidence that's piling up quickly. His win came after he beat five players, and all five of them have noted they were suspicious of his behavior and play during the games.

A History of Shady Behavior

Something that's really interesting about this, and the key thing that probably makes this a bigger deal than it would be otherwise, is that there have also been claims that Coca has a history of being banned from casinos on allegations of marking cards and cheating along those lines. This history is still being checked out at this point, but a man Martin Kucharik who used to be a Czech casino manager has backed up these allegations. He's not a journalist in Prague, for what it's worth.

Specifics of the Claims

Connor Drinan started off by sounding off on social media about Coca's play. He noted that the mannerisms and pace of Coca's play was along the lines of what you would expect to see by someone who was scamming with a marked cards approach. This is particularly specific, and considering that all four of Coca's other opponents felt the exact same way about how he was playing, it doesn't bode well for him if his past of being banned from Czech casinos for marking cards holds up.

To make matters even worse for him, Keith Lehr (who defeated Coca and won the event) also spoke out that his opponent's mannerisms suggested something was amiss. For the time being, there is no concrete proof against him, and investigations by World Series of Poker officials are ongoing. This is a really interesting situation because, as the saying goes, when there's smoke, there's fire. And right now, there's a whole lot of smoke from where Valeriu Coca is standing. Until some more substantial proof is found, however, we'll have to just wait and see what happens in the court of public opinion.