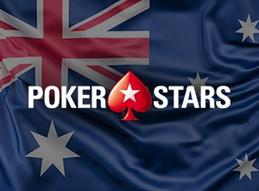 PokerStars Partners, the marketing arm of The Stars Group (formerly Amaya) responsible for promoting the popular brand, announced to advertising affiliates on Tuesday that all promotion of the PokerStars brand in Australia must cease immediately.

August 9 the Australian Senate passed the Internet Gambling Amendment Bill 2016 after the bill had passed the house in similar form in June. PokerStars announced soon after that they would be leaving the market, just as 888Poker and others had done previously. Several online casinos, including Vera John Casino, pulled out of the Australian market earlier in the year.

The letter from PokerStars Partners to affiliates stated that they expect all PokerStars branding and links to be removed from Australian-facing web sites including - local AU sites, sites hosted with a top level Australian domain i.e. "name.au", and any web sites with domain names such as au."name".com.

The brand further directed marketing partners to immediately stop advertising for PokerStars in Australia through media such as TV and print, etc., and assured affiliates that all player funds are safe and available for withdrawal. PokerStars has provided a faq page for Australian players.

In the directive, the company spoke of their hopes that real money poker play would return to Australia in the near future and referred to lobbying efforts by the Australian Online Poker Alliance: "As supporters of sensible online gaming regulation and the most licensed poker brand in the world, we hope that future legislation will be considered that will allow PokerStars to return with real money offers in the future. The Australian Online Poker Alliance has done great work lobbying on behalf of Australian poker players this year," read part of the missive.

No Longer Paying for Traffic

The company also informed affiliates that they would no longer be paying for traffic sent to them from Australia beginning 1st September 2017.