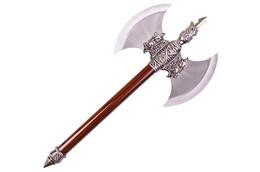 There are a handful of gambling-related movies that have become classics. Rounders is the greatest poker movie of all time with Matt Damon and Ed Norton, and the older Cincinnati Kid is a classic as well. There have been multiple attempts to create new films based on gambling themes, especially poker, but none of them have really gained the steam behind them that those two films did. A new movie called Cold Deck is coming out soon enough, and it puts a bit of a twist on the traditional themes found in poker movies.

The plot of the movie centers around a high-stakes poker game. Someone robs the game, something that's actually fairly common, especially in areas where the games have to be held outside of the law. In an odd twist, one of the players in the game happens to be a complete nutjob who has a hobby of being a psychotic killer in his spare time. Moreover, this psycho apparently likes battle axes, which just piles on the ridiculousness. We can't tell if we're supposed to take this movie seriously at this point or if it's a dark comedy.

So far from what we've seen, there are actually some important themes that will be covered in Cold Deck. For example, the people who decide to rob the high-stakes game in the first place are driven by financial difficulties, largely through their losses in poker games. It's common knowledge that people who go into financial problems through gambling sometimes turn to crime as a solution. The dangers of playing in an unregulated high-stakes game also become apparent, and they're typically juicy targets for criminals.

Not Sure What to Think

We aren't really sure what to think about this one. We're far enough past the poker boom that there aren't that many movies being made about poker, but the plot of this one just seems so far out there that we don't know if it's going to be an embarrassment to the game or not. Paul Sorvino and Robert Knepper star in the film, however, so it might not be as bad as the plot summary seems to indicate.