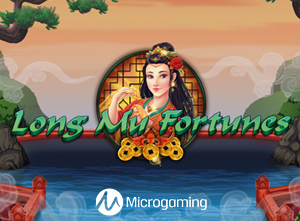 Game developer and iGaming industry giant, Microgaming, is keeping up its release schedule by debuting another new slot experience this month.

The game is called Long Mu Fortunes and is a fresh take on the Chinese myths which have proven quite popular as a game theme in the gaming industry.

A game that’s filled with special features and a handsome jackpot has been developed by Fortune Factory Studios, the same talent behind the hit title, Village People Macho Moves.

Commenting for the studio, Phelan Sykes Head of Game Production, stated that this game brings a classic Chinese myth to life and interprets the legend into exciting and highly volatile gameplay. The game boasts stunning graphics and drips with opulence and riches.

“We can’t wait for players to experience the power and majesty of Long Mu’s dragons and immerse themselves in the world of Long Mu Fortunes”, Mr. Sykes concluded.

When it comes to special features this game is all about the respins. Getting a Red Dragon stacked wild on a reel will trigger it and it’s during the respins that other dragons will appear bringing with them multipliers of 1x to 3x.

A really great thing is the existence of the nudge feature which will shift the stacked wilds up or down so they always fill the whole reel.

The appearance of the red dragon is important for another reason. Each appearance will put some coins into the coin jar at the top of the playing area. Every time this happens there is a chance that a jackpot will be activated. There are two levels – the Major and the Grand, and their size depends on the current bet level.

To top it all off…

…there is the extra spins mode which is triggered by three scatters. When they appear on reels 2,3, and 4 they give out 10 extra spins but also a very nice introductory prize of 2x the total bet amount.

And the respin features are still active during this mode but with a twist. All stacked wilds will have an x3 multiplier by default, so this is a chance for some truly big wins.

Long Mu Fortunes is available right now at all online casinos who carry games from this developer.

Microgaming is an iGaming veteran that serves as both a game developer and platform provider to many online operators. The company is known for its high-quality games which are produced both in-house and by a large roster of third-party developers.

Maintaining a tight release schedule is another thing this firm is known for, with their previous release being the Halloween-themed A Dark Matter.