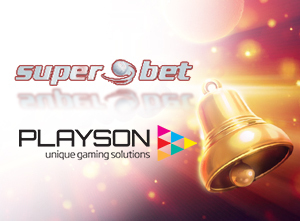 Game developer and casino software supplier, Playson, has recently inked a deal that would let it continue its expansion into the Eastern European market and Romania specifically.

The agreement is with one of the top Romanian operators, Superbet.

“We’re delighted to have inked this partnership with Superbet and to offer its players our popular suite of slots.

“Expanding our presence in Romania has been paramount after obtaining our license from the ONJN and we’re thrilled to offer our games to Superbet’s customers.”

Commenting for Superbet, Heather Faulkner, Head of Gaming stated that the company has been “hugely impressed with Playson’s portfolio” and how they are sure “its games are going to be a big hit” with their players.

“We’re delighted to be working alongside such a well-respected provider and look forward to a long and mutually beneficial business relationship,” she concluded.

This agreement is especially important for the casino supplier as it marks one of their first deals with Romanian operators after recently obtaining a license by the country’s gaming authority and partnering with Platinum Casino.

This license allows, for access into this regulated market and strengthens the company’s foothold in Eastern European iGaming space.

The developer also recently made an agreement with casino, lotto, sportsbook operator Yobetit which will let them access even more regulated markets.

Licenses are very important for companies in the igaming industry…

…and Playson has started August in the right way by going through rigorous testing from the Swedish Gambling Authority and clearing them all. The passing of stringent audits makes the firm completely compliant with Swedish law and able to operate fully in this attractive Nordic market.

The latest addition the portfolio of games Romanian punters will enjoy after this deal is Fruit Supreme 25 Lines which is also the newest entry in the long-running Timeless Fruits series.

The Timeless series is this developer’s way of honoring classic style fruit machines that used to entertain people in arcades, pubs, and similar venues.

While the look and feel are old-school, the game comes replete with innovative and modern gamification, a perfect blend of the old and the new.

The leading game developer, Playson, supplies their certified and tested games, slots, and other content worldwide. They operate on the regulated markets of Malta, Italy, Spain, Sweden, the UK, Romania, and others.

The games they make are HTML5-based and mobile-friendly as the modern industry demands. There are 60 omnichannel offerings in their portfolio.

Based in Malta, the company has offices in Ukraine, the United Kingdom, and Greece.