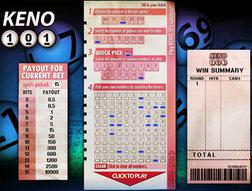 Keno 101 has an auto-play feature to play up to 50 games, a quick pick feature that will pick your numbers for you and up to 10,000 coins to win! Keno 101 is a new game just released at Win A Day Casino.

Read our Keno 101 review to learn how to play this new online keno game, which uses Slotland software, and find out why they labeled it “Keno 101″. You will find Win A Day casino’s new game in our casino specialty games section, since keno is considered a specialty game at most online casinos, with our list of other software specialty games.

The Keno 101 online keno game has 80 numbers on a single card, a choice of 1 to 15 numbers to select, and an auto-play feature that plays up to 50 games at a time. It also has a Quick Pick feature, that’s my favorite feature of the game, and you can pick up to 15 numbers with just a couple clicks.