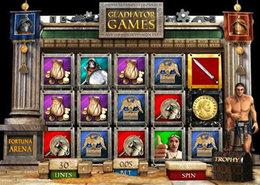 Gladiator Games slots have 5-reels and 30-lines with wilds, scatters, and a bonus feature, where you pick how a gladiator fights in arenas and try for a coin-filled treasure chest! Another unique game added to the new slots lineup at Win A Day casino. U.S. players welcome.

Visit our Gladiator Games slots review to get all the details on how to play them. Like which tactics will work best during The Gladiator Duel feature, or how to win the coins in the treasury or treasure chest. And as always, check out our new slots section for the best reviews on the latest slot games as they appear online.

The wilds in Gladiator Games slots are lion gates, and when they appear on the reels all Lion symbols can change into wild symbols. And that could turn one game into one nice payout with the right symbols showing.

The Gladiator Duel feature is triggered when the following four armament symbols are collected; a Helmet, a Sword, a Shield and Amour. The Gladiator duel will take place in an arena, which is the same arena name shown in the bottom-left of the game.

After the feature is triggered, a new scene will appear with three Gladiators; pick one. An arena scene will appear after picking your gladiator. Choose the proper attack or defense for the arena you’re gladiator is fighting in (see our Gladiator Games slots review for more info).

Play Gladiator Games slot game today to find out if you have what it takes to be a Gladiator and win the game’s treasury!