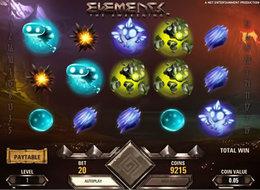 Read our Elements 3D slots review to find out how the game is played and to see what happens during the four free fall modes. You will find a small review on this new game in our new slots section and find it listed in our Net Entertainment slots area; look for the “new” tags. Or, visit Mr. Green Casino now and play it for yourself.

Elements 3D slots are actually called, Elements: The Awakening slots, and you’ll know why after you activate one of the free fall features. A small movie scene will appear and show you which free falls mode has begun.

One of four free falls features will begin after the game’s Avalanche Meter has filled up, or after getting four winning fall combinations in a row. The free falls mode that is activated will depend on the game’s Energy Meter (the game’s Spin button), which shows one of these four color-coded free falls modes; Fire Storm (red), Water Storm (aqua), Earth Storm (green) or Wind Storm (purple).

Here’s an example of how the Free Falls feature is triggered.

Four fall wins of three different elements has just occurred, but there were more credits won by Fire elements during the main game. The Energy Meter will show a red triangle just before the Free Falls feature begins; this means the Fire Storm mode has triggered.

The next scene will show a small movie of a fiery animal with a big fireball tail jumping on rocks in a lava field (which, by the way, is very realistic looking). This fiery animal will also run across the screen during the upcoming free falls feature.

When a Wild symbol appears, a copper colored 3D Box, it will turn and light up to show the face of the fiery animal. The fiery animal will then run across the screen, slam its fireball tail on the box symbol and make it wild, along with making two other adjoining symbols wild as well.

These extra wilds can create several more winning combinations, and thus a larger void is created; making room for more symbols to fill up on the next fall. After that, several more fall wins can be acquired and extra coins collected.

The three-dimensional graphics in Elements slots are so impressive you’ll forget to keep an eye on your credit balance. The game is considered to be high variance slot, so be sure to watch those credits.

Visit your favorite Net Entertainment casino, or try the one below, and play Elements, The Awakening slots today!