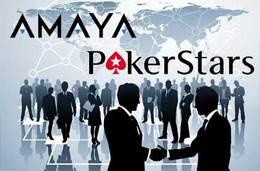 Probably one of the biggest shockers of the year in online gambling news; was the purchase of PokerStars – only the biggest, and most famous poker product ever established online! This business is a Guinness World Record breaker,and the only online poker business to survive an onslaught from the Department of Justice that brought this form of gaming to a halt in the USA. Black Friday was the day of mourning, when thousands of US online poker pros were no longer able to play this game for a living.

Post-Black Friday, PokerStars continued operate and grow from strength to strength throughout legal, and regulated territories in Europe and the UK. However, FullTilt, Ultimate Bet and othersites went the way of the dinosaur – extinct. FullTilt left a hell of a mess behind them which eventually prompted PokerStars to purchase FullTilt, in the process cleaning-up some of the lost reputation of online poker in the USA.

The latest news sees Amaya following the money in a massivePokerStars deal, with a closing date reported for the end of September 2014. This deal has apparently been closed nearly two months earlier; this news is another shocker too. These types of massive money exchanges, generally take much longer than anticipated to close.

A multi-billion dollar deal gone so smoothlyhas taken place, because both businesses new exactly what cards were on the table. It seems that no bluffing has gone on here. There was both a willing seller, and buyer, as well as a few regulatory changes that have taken place in the USA. What these three important ingredients meant to the deal, was a far smoother transition.

While $4.9billion dollars might seem to be hard to find to most of us, there are ways and means of doing this in the corporate world. Online gambling has become a mainstream industry, many firms are stock exchange listed, and investors want in. In this deal the sellers wanted cash, all Amaya had to do was raise these funds, so new shares were issued, shareholder approval was sought, and investment bankers made the rest possible.
But what is the real reason behind this deal? PokerStars is tainted by its past history of operating in the USA when they weren’t really supposed to be. They need cash to form a “squeaky-clean” new vehicle, to access new online, and other gambling opportunities in the USA. They have sold their cash cow, Amaya has got what they want, regulators are happy, there are no job-losses, so no problems were had in closing the deal. But what we are wondering, is, what will PokerStars founders are going to be doing with all that loot? Presumably they will be following the money too.