Get up to $100 Free to Play Dolphin Reef Slots at Intertops Classic! 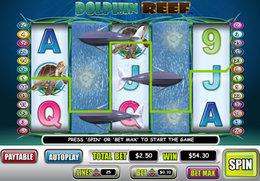 All players get up to $100 free to play the new Dolphin Reef slots at Intertops Classic casino, from now until October 24th 2013, by entering coupon code DOLPHIN100 in their casino cashier!

If you don’t feel like playing right now, check out our Dolphin Reef slots review to find out when the re-spin feature kicks in. Dolphin Reef is also listed in our new slots and Wager Gaming slots sections.

Now, here’s a little information about the Dolphin Reef slot game: There are 5 reels and 25 paylines with a respin feature that is triggered by two wilds on reels 2 and 4. The game is not really considered a bonus game, but it may as well be called one when you hit the respins.

The first thing that happens, before you even realize the feature has started; dolphins will jump over reel 3 from reels 2 and 4, which are now wilds, and you are awarded wins from any winning combinations during those first few seconds.

On a personal note, I didn’t know what the heck was going on until after the respin feature was over. That was when I decided to look up the information on the game’s rules page. It mentions, “Any pays are paid upon the triggering spin”. That means, any wins that happen at the activation of the two wild reels, before respins begin, will be paid out to your balance.

After the first wins are collected, the respin feature will commence. Reels 1, 3 and 5 will spin five times, as reels 2 and 4 remain stationary in their wild liquid states (literally). Wins are collected after each respin. When the feature has ended, you will have to click on the spin button again to remove the watery wild reels.

The Dolphin Reef slot game is even available in free play mode, if you want to try them out before you play for real. Head over to the following casino and give them a whirl.