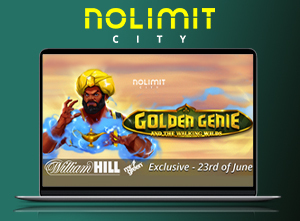 Nolimit City celebrates yet another top tier collaboration with a timed-exclusive effort with non-other than William Hill group. The Malta-based software provider moves towards mega stardom status thanks to the joint collaborative effort towards promoting their next big release - Golden Genie & The Walking Wilds slot.

This marks the first time Nolimit will be collaborating with the multinational UK powerhouse along with their flagship owned brands, along with the Latvian frontrunner brand, 11.lv.
Malcolm Mizzi, Commercial Director for the developer, express the brand’s enthusiasm about collaboration with such esteemed name in the gambling industry:

“Working closely with the team at William Hill is an absolute delight. No one is as enthusiastic and passionate about great slot games as the people behind this incredible company. We’re exhilarated to be showcasing such a feature rich and engaging title on all their brands worldwide,” said Mizzi.

The new addition to the provider’s portfolio receives the red-carpet treatment with Hill’s pre-release. The timed-release will see the studio’s latest title positioned across all Hill's sites including the iconic brands, MrGreen and Redbet international for an early exclusive timed-release period starting from 23rd June.

What Can Players Get from The Golden Genie & The Walking Wilds Slot?

Nolimit’s latest title offers players a magical experience thanks to the feature-rich game design and lush graphics. Set in an Arabian whimsical setting with the all mighty Genie, this 5-reeler with 20 paylines offers interesting special features and highly engaging gameplay.

It includes two random base game features and an exhilarating Bonus round:

Players eager to activate bonus rounds can benefit from the provider’s signature buy-a-feature option. It is present in this release as well as in many of its latest titles, including Punk Rocker xNudge, Barbarian Fury, Dragon Tribe and Deadwood.

All of the provider’s content has something in common – they provide high-quality entertainment and exciting playing experience. It is the main reason why players love to play them and operators to have them in their game sections.

The brand is cooperating with some of the most reputable names in the industry including LeoVegas, Betsson, Wunderino, etc. Most recent collaboration agreements signed by the brand are with LuckyDino Gaming, MrGamble, Coolbet.com, CasinoMeister and L&L Europe.

Nolimit and Hill have a longstanding partnership, especially regarding exclusive premiers of the developer’s new releases. Golden Genie & The Walking Wild slot is yet another example of such a form of cooperation between brands, and for now is available to players only on Hill's platforms and flagship owned brands before its global launch.