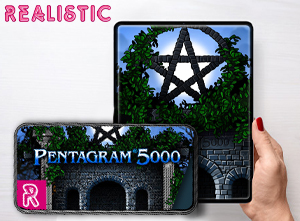 An award-winning iGaming content provider, Realistic Games, has announced the new addition to its Pentagram series in the form of a highly-engaging slot by the name Pentagram 5000. Besides very interesting gameplay, the latest release comes with quite high winning potential.

This game with 3 reels and 5 payline configurations is set in an overgrown outdoor space with moss that could serve as the setting for any horror movie. The imaginative theme awakens the scary sensation that keeps players on the edge of their seats.

Nothing less thrilling is the extra spins round containing a doubling symbol that can increase chances of winning and improve player engagement.

First Slot By Realistic With RTP Of 97%

While the theme is set in a scary surrounding, the symbols don't follow it. You are getting the classic bars and fruit symbols, making this title perfect for the ones who prefer more simple gameplay to practice their gaming strategy.

...there is a bonus round that will entice players and makes everything a bit more entertaining. Triggered when PENT, STAR and GRAM symbols land on any payline, this feature round will at first award 10 extra spins and a 1x bet multiplier that increases with each coinciding win. If the Pentagram symbols lands appear in any position on the middle reel, the total of extra spins doubles to create greater even opportunity for big rewards.

...the high-winning opportunities are shown in the slot's name. The maximum wins can go up to 5000 times the bet! As a sequel to Pentagram, the game comes with medium volatility.

What's special about it is that this is the first slot in the developer's collection with the RTP of over 97%. Such percentages are launching this game on the list of the slots with the best odds.

A Landmark Addition To The Brand's Portfolio

More than 9 years have passed since Realistic launched its original Pentagram slot. After all that time, it is still one of the popular games amongst the players. Now its sequel comes with similar classic gameplay but enhanced with the massive increase of the title's RTP, as well as winning potential.

...the launch of this latest release was preceded by the adding of the low stakes variants of table games in the provider's portfolio. With this gesture, Realistic has shown that it is taking care of all its players and proved it by releasing a new slot soon after this addition.

Robert Lee, Commercial Director at Realistic Games commented on the launch of the new release:

“Pentagram 5000 is a landmark addition to our slot offering and reflects a general trend to offer games with a higher return to player, attracting both casual slot fans and casino enthusiasts.

Years after release, the original Pentagram is still a player favourite, and we expect that the simple gameplay and rewarding bonus round in the sequel will prove to be equally popular with players.”