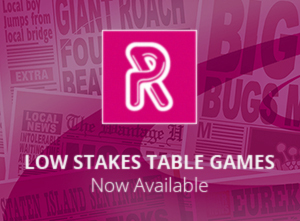 Esteemed provider of casino content, Realistic Games, has released a low stakes variation of table games, announcing that it will make a difference in the market. The provider's games such as European Roulette and Blackjack versions (three and five hands), will be accessible with a minimum required wager of 10 pence or equivalent in other currencies.

...that more customers will show interest to test the brand's games following the decrease of the minimum stake. Also, he thinks that with this action the company will have better chances to attract sportsbook players with its latest decision.

“Table games are very popular, but entry points are traditionally higher than slots and not everyone wants to spend as much on their entertainment, by having low stakes options we are not alienating anyone from playing.

We’re also very conscious that casinos have attracted new customers in recent times, many from other verticals, so this may provide an added incentive to continue playing”, said Lee.

What Table Games Are In Its Offer?

As a gaming veteran with over 18 years of experience in the gambling industry, the brand has gained a great reputation amongst the operators and players. By the statement on its official website, all products are “created to the highest standards and with great attention to detail.” That’s shown in their engaging releases that are very popular on the market.

When it comes to table games...

…the developer has some quite interesting selection to offer.

Some of its hit casino titles are:

In the following months, Realistic Games will continue to optimize other games.

A low stake option will be implemented in many titles, starting with three and five hand variations of Perfect Pairs/21+3, and Hi Lo Blackjack.

One of the titles that has taken the industry by a surprise was the developer’s Game Changer slot, released in February 2020.

Following quite a successful exclusivity period with the GVC group...

...now all brand’s partners will have access to this exciting 5-reel, 20-line slot.

With an original bonus feature triggered by boxed symbols landing around the edge of the slot to form a game board, it presents very interesting gameplay. When the feature activates, players then roll the dice to move around the board, landing on either a cash prize, a good square or a bad square, with a potential win of up to 6000x the stake! There are 324 million potential board combinations, so punters should never see the same board twice.

This is just a start of special features flying left and right, and Game Changer is quite worthy of its name. It has also marked the launch of a new series of upcoming slots from the supplier, all featuring a similar board game mechanic.

But the brand takes care of all of its players, not just its slot fans. Adding low stakes variations into its releases is surely great news for all table games lovers.