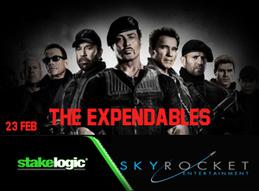 Slot developer, Stakelogic, has announced a new partnership with the media firm, Skyrocket.

This new deal will let the developer enter the world of licensed offerings. The media rights entity currently holds licenses for many top Hollywood movie series such as The Expendables, Rambo, and Hercules.

Branded and licensed titles are not a new thing for the iGaming industry as other developers such as Microgaming have been pursuing this avenue for years.

But, it is a new thing for Stakelogic who will now have access to a plethora of different licenses to pick from.

…is a video slot based on the movie series The Expendables. This series which currently has three entries with two more scheduled for the near future is home to action stars like Sylvester Stallone, Arnold Schwarzenegger, Jason Statham, and others.

The movies have been greatly successful and the developer is obviously hoping to capture some of that success with their igaming version.

…the game comes equipped with the Megaways mechanic on license from Big Time Gaming. Megaways is an innovative and exciting approach to reel structure where the row number can vary from spin to spin thus creating a more dynamic experience with more ways to win.

This first in the series comes out on the 20th of February with more offerings to follow later in the year. Punters will be able to try their luck in this testosterone-fueled slot adaptation at all casinos who carry games by the developer.

“We are excited to enhance our game portfolio with our first series of branded slots. “We have secured some of the biggest brands in the movie world which simply would not have been possible without partnering with Skyrocket.”

“We have some incredible things planned for these brands and look forward to launching Expendables Megaways next month.”

“We are delighted to be working with this developer, a fast-moving and exciting company. Their talented team bring the energy and creativity to deliver epic games – which is the perfect fit for Skyrocket and our global film brands.”

Established in 2014 they quickly grew by creating innovative and high-tech games that targeted the then-nascent mobile gambling sphere.

According to the company’s own website, they are “all about innovation and revolutionizing the online gaming industry.”

It’s not just games where the company has gained a foothold in the industry. They also supply gaming platforms to casino operators. These platforms are focused on player experience and are backed by advanced algorithms and turnkey support solutions.