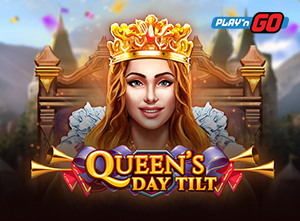 There's no doubt that the first four to six weeks of the new year is what sets the tone for the next 11 months for any online slot developer. While not all software providers act like they know this, many do, and Play'N Go takes this time of year and this concept as a whole very seriously. That's why we're seeing lots of new releases from them right now, and that list includes the new Queen's Day Tilt online slot.

What to Expect From This New Release

The release of this game is interesting because it has Play'N Go going to a format that you hardly ever seen, especially for newer games. You'll see three vertical columns and three horizontal rows here, but it doesn't use the typical payline structure, and that keeps it from really being considered a classic slot. Instead, you're trying to match up two or three symbols vertically or horizontally to get paid. Not only does this mean you're getting plenty of ways to get paid on each spin, but it also means that you're going to have a higher hit-rate than you might expect from a three-by-three title.

The Ruler feature is probably the one that most players are going to remember, and it triggers at random after any spin that wasn't a win. What it does it adds winning combinations where there were none, which ultimately amounts to free money that you weren't going to get otherwise.

From there, you also have the Queen's Day feature. Winning combinations disappear, and if you clear the entire nine-spot grid, then you get five free spins with a 2x multiplier. These wins on knight symbols increase your multiplier. Note that the name of the game comes from a tilt feature that gives you a chance to trigger this feature if you only clear eight of the nine spots on the game board.

There's no doubt that Play'N Go is absolutely tearing it up when it comes to their new releases so far this year. They have been particularly aggressive with the pace and the quality of the offerings, and we hope to see that continue throughout the rest of the year.