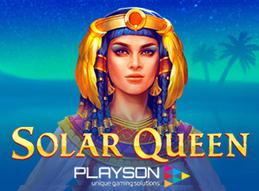 Award-winning game developer, Playson, is taking punters on a trip to a place of mysticism and beauty with their new release -- the Egyptian-themed slot, Solar Queen.

In this game, fortune favors the bold who journey beyond the sands where big wins are on every horizon.

With extra spins, sticky wilds, and progressive multipliers, this is one game by Playson that will keep many a punter interested and engaged.

Solar Queen is a 5x4 game with 20 fixed paylines and the newest in the series of Egypt-inspired games by this developer. Punters who enjoy this theme were really spoiled for choice by Playson…

…between games like Legend of Cleopatra, Book of Gold, and Rise of Egypt.

Now those same players will get to enjoy another take on Egyptian myths, this time focused on the Sun and its resplendent beauty.

Vsevolod Lapin, Head of Product at Playson, said: “With its stunning graphics and progressive gameplay, we’re expecting Solar Queen to be a big hit with slot fans. This exciting new game is bound to bring out the adventurous side in players and will be a fantastic addition to our growing portfolio.”

Fitting for a game about the Sun, when it appears on the reels big and useful things happen that can potentially lead to a big win.

…sun symbols appear randomly on the reels. They mark that position with a flaming frame and in 10 more spins, they become wild.

But even more importantly…

…if a sun lands on the same space again, it awards a multiplier that lasts until all the flaming frames turn wild.

And should three golden scarabs appear during this time, the multiplier is brought over into the extra spins game.

All Hail the Solar Queen:

Playson decided to celebrate the release of this game with a tournament consisting of a €30,000 prize pool.

The All Hail the Solar Queen tournament will run from the 18th to the 28th of July and will see a massive 250 online casinos participate.

The minimum qualifying bet is 0.5 euros and players will have to place 50 qualifying bets in real mode. A live leaderboard will keep track, showing the number of points each punter has.

The second and third prizes are €4000 and €3000 respectively. There are prize tiers all the way down to the 100th position with the lowest prize offered being €50.

A leading game developer that supplies its certified and tested content worldwide. They operate on regulated markets such as Malta, Italy, Spain, Sweden, the UK, and others.

Their portfolio has more than 50 omnichannel games as well as a suite of promotional tools.