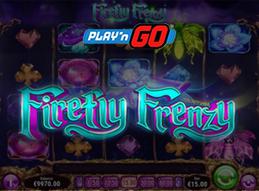 Fireflies are fascinating creatures. Every summer, they emerge from their underground slumber and light up the forests and fields.

And now they will light up the reels of this new five-by-four slot release by Play’n Go. Firefly Frenzy is a game set in a psychedelic enchanted forest where fireflies can land on the moon and trigger extra spins with amazing win potential.

With multiplier wilds, extra spins and the chance of winning up to 10,000x your stake, a magical adventure awaits.

In this game full of vibrant and rich colors, the fireflies aren’t the only thing that shines. Enticing special features await gamers in this Play’n Go take on the magical forest setting.

Standard wins in the game are achieved by matching three or four or five symbols on one of the game’s 30 paylines.

Something extraordinary happens when the fireflies descend from the sky and fall on the reels. They help players win by substituting for any symbols other than the scatter.

And that’s not all; on their backs, they carry multipliers that will increase any winnings they’re a part of. And if there’s more than one they combine together and stack!

Announcement of this new offering comes after the developer has already released Rise of Merlin, a game inspired by Arthurian myth and the legendary wizard Merlin in which the players can meet characters of legend.

This was the company’s first foray into Arthurian themes but not the first or last time taking on magical and mythical settings.

A game with a different, more sinister type of magic, was Rich Wilde and the Tome of Madness and it offered a glimpse into a terrifying world of H.P. Lovecraft’s popular Cthulhu stories.

A dangerous and maddening adventure quite unlike the whimsy and playfulness on offer in the most recent release.

Shoot for the Moon:

The real frenzy begins when a firefly shoots for the moon and lands there. That’s when the games bonus feature will be triggered. The value of the multiplier on the wild that triggered it becomes the value of all the wilds during extra spins.

Initially, the punters will be awarded 8 extra spins but…

…the feature can be re-triggered! And if the starting wild is higher than the previous one, it’s going to upgrade the extra spins.

This is one high variance and high potential exposure slot that players who like unpredictability shouldn’t miss.

A game supplier based in Sweden who has been making online slots since 1997. Known today for being one of the partners in Microgaming Quickfire platform.

They are also known as a producer of many original and highly regarded games such as Wild Rails and Game of Gladiators.