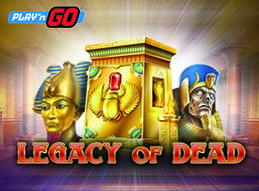 Developer Play’n Go is starting the new year on a high note with a brand-new release that’s all about ancient Egyptian mythology.

With many special features and expanding wilds, the slot specialists are not resting on their past success.

This release also marks the beginning of what Play’n GO is calling their busiest release schedule yet. That’s because the company plans on releasing a whole 52 games this year. For those keeping count, that is one game each week in 2020.

CEO Johan Tornqvist commented on the game and the plans

Legacy of Dead is the very first in a series of quality gaming releases that will further cement our status as one of the foremost suppliers in the industry, and we will bring slot entertainment to a whole new level this year.”

The offering centers around the legend of an Egyptian King released from death and in a quest for power and riches.

Punters can join in on that quest in this 5-reel game with 10 variable paylines.

A game that’s all about myths and legends needs equally stunning features that the developer has definitely delivered.

It’s all about the extra spins round in this video slot.

To trigger it, three or more scatters (in the form of tomb) need to land on the reels.

Once this happens, the mode beings. And there is an interesting twist. One symbol will be randomly chosen to become expanding. This means anytime it appears – it will cover the entire reel.

Needless to say, this creates an excellent win potential.

…the mode can be retriggered. And any time it is, another symbol will become expanding. By retriggering enough times up to nine symbols can become special and expand.

To sweeten the pot…

…there is also a gamble mode present. On any win, simply by clicking the gamble button, punters go for gold and try to increase their win.

It’s double or nothing when you bet on the card color but it’s quadruple or nothing if you choose the tougher action – betting on the exact card suite.

This isn’t the first time…

…that this developer has chosen an Egyptian theme for their offering. Just last month in December, they released Ankh of Anubis.

The year is beginning the same way it ended, with a high-quality slot title set in the evergreen Egyptian mythos.

Play’n GO is a big player in the igaming industry. Founded way back in 1997 in Sweden, the company has quickly become one of the premier suppliers of video slots and other casino content.

Arriving right at the beginning of the online igaming revolution, the developer has now grown and spread out across the world. With offices in the United Kingdom, Malta, Hungary and the Philippines it’s a global presence of quality and excellence.

Known for innovative releases such as Rise of Olympus and Game of Gladiators as well as their management platform which lets operators run their casinos in advanced and engaging ways.