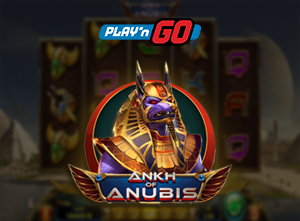 Sweden-based developer, Play’n GO, is putting out another Egyptian-themed slot title. Ankh of Anubis returns to a familiar inspiration for this developer but offers some new and unexpected twists.

The title features a diamond-shaped grid with 700 ways to win, which is only the second such title the company has released after Mermaid’s Diamond.

…and the other one is even bigger.

In order to modernize the Egyptian themed games, the developer has chosen to set this game in the far future. It’s an alternate timeline in which the god Anubis has ruled Egypt for centuries…

….and turned into an amazing and advanced futuristic kingdom of great prosperity.

“Egyptian themed slots are very popular, and we are always coming up with new ideas, but the most important thing is not to keep releasing the same game over and over again.

Each time we create a game with a theme we have used before we ensure that we improve by adding something new or upgrading what was done before.

Ankh of Anubis is a perfect example; we switched the focus of the game, used a new format for the grid and came up with a creative free spin feature, and players are going to enjoy seeing their favorite theme done in a new way.”

It’s not just the setting and the payline configuration that’s new and interesting in this title.

The developer has packed…

…a great deal of features that are engaging and fun.

Chief among them is the power of the Anubis wild symbol which randomly adds more wilds to the reels. This way, it creates additional chances for a winning combination.

The wild can also appear as a stacked symbol showcasing the top-notch and detailed graphics.

There are extra spins too

Activated by the appearance of three or more scatter symbols, the feature can be endlessly retriggered extending the fun.

..up to 15,000x of the bet in this newly released title that comes hot after the heels of similar Egypt-inspired offerings like Doom of Egypt.

The game is already available to play at all online casinos that carry games from this developer.

A very well-established game developer that was founded in 1997 in Sweden. Since that time the company has spread out across the world with offices in the United Kingdom, Malta, Hungary, and the Philippines.

Producing high-quality games, such as Rise of Olympus, they have quickly become one of the leading presences in the igaming industry.

Known for their casino platform as much as their games, they offer solutions for operators to run their casinos in innovative and advanced ways.