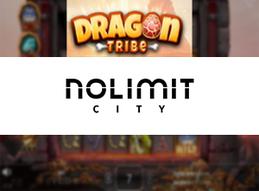 Developer Nolimit City is bringing a successful year to an end by releasing a new game called Dragon Tribe.

With a theme inspired by the mythical creatures and some innovative and exciting features, this new release is the perfect end to a very fruitful year for this Malta-based company.

The game boasts an incredible 4096 ways to win, but that’s not the end…

…because the interesting and engaging features actually expand the reels to create even more winning chances.

Bringing back its trademark xNudge and xWays features, this release promises to end the year with a bang.

“Producing a cascading slot with both xWays® and xNudge® has been an exciting challenge to tackle, and gave us the opportunity to create an explosive slot with true win potential. Making the player select his preferred version of Dragon Spins bonus mode, brings something truly unique to this game.”

The exciting xWays and xNudge features were last seen in the company’s Pixies Vs Pirates offering. Now they are back again to delight and entertain punters who spin the reels of this game at all casinos who carry this company’s games starting the 12th of December.

xNudge and xWays, Together at Last

The main features of the game revolve around a nudging wild, and a special mystery expanding symbol.

Any wild that lands on the reels will drop down as the winning symbols disappear and make way new ones. This increases the multiplier for every step the wild take on the way down.

But the real showstopper is the expansion feature. Once the symbol hits the bottom it expands to cover the whole reel making room for some new wins.

The xWays symbols can appear on any spin in the main game and holds 2-3 of the same mystery symbol that will be revealed when it expands. It’s expansion also triggers the expansion of the reel with up to 6 new positions.

The reels are high and so is the number of possible ways to win.

The action really heats up in this slot game when three bonus symbols land on the reels because the punters are given a choice. The choice between two extra spin modes – Dragon Spins or Dragon Spins Extreme.

The first is less volatile but only activates the xNudge feature. The second has much higher volatility but activates both xNudge and xWays features.

Punters can freely choose the type of special features to their taste.

Nolimit City is a Malta-based developer and casino platform provider offering high-quality games and an in-house designed management platform. With a strong and powerful engine, it can handle large volumes of play and social interactions.

They are also known for games such as Thor: Hammer Time, Hot 4 Cash, and the recently released Tomb of Nefertiti.