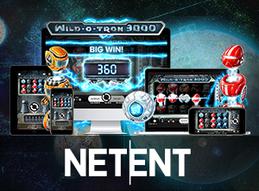 With 2018 coming to an end, Net Entertainment is being sure to end on a strong note so that they have a ton of momentum heading into the new year. They're working on capping off this year with the release of their Wild-o-Tron 3000 video slot, a title that offers a fun theme and strong gameplay.

The theme of this game has different robots on the reels that always appear stacked in sets of threes for the head, torso and legs. This game has 20 paylines, so you get plenty of opportunities for multiple wins on the same spin thanks to this setup. However, there are also wild spins, and there's the Wild-o-Tron feature.

The Wild-o-Tron feature is triggered at random on any given spin. When that happens, up to six of the robots are chosen as additional wilds. Since they appear stacked, this means you're getting random stacked wilds. The colors of the robots that become wild are listed out on the right-hand side of the game board as well, so players are given a lot of opportunities to pick up some seriously massive multi-line wins with this feature.

The space sci-fi style of film has always been popular, and this game is an example of Net Entertainment picking up parts of that idea and running with it to give players a pretty innovative style of play. It's the kind of thing that we enjoy seeing, and the gameplay in particular is a lot of fun.

Net Entertainment has almost two decades of experience in the industry, but it's been the last third of that experience that has put them on the map to the degree that they are now. They're generally known as one of the top slot producers in the world, and they always have something new coming out on a regular basis like Wild-o-Tron 3000 that gives players a fresh type of experience. We love what this game has to offer both from a gameplay standpoint and the visual/graphical side of things, and we're sure that it'll be well received by players.