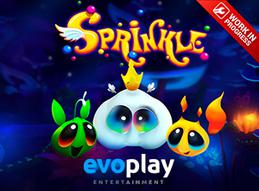 Innovations in the online slot industry haven't been the most plentiful over the past decade. While we've seen the level of graphics and presentation improve, and while we've seen some new ideas for features, things have mostly stayed about the same when it comes to the fundamental gameplay involved.

Evoplay Entertainment has made a recent announcement about their upcoming Sprinkle online slot that helps to push the genre in a new direction, however, and this comes thanks to its work on virtual reality and 3-D titles.

What the Sprinkle Slot Brings to the Table

In terms of presentation, this game uses a fun theme with glowing mushrooms and a great musical soundtrack for an immersive experience. However, its the virtual reality work and 3-D graphics that really make this title stand out. It's their second slot in the VR space, and they definition learned something from their previous experience since this game is breaking all of the rules when it comes to what people think of when they think of online slots.

This software company is known for their innovation and for pushing the envelope. Their most recent release before this was Necromancer, and it was nominated for a ton of awards in 2018. In fact, it was one of the most popular releases of the entire year in the industry as a whole, and you aren't able to break out of the pack in that way without really knowing what you're doing and having a knack for blazing new trails.

Evoplay Entertainment has more than 50 total titles to their name, and this includes now two different virtual reality slots. They've been around for a while with a great reputation, but they're looking to expand that further with expected licenses granted sometime this year in both the United Kingdom and Malta. It's clear that they care a lot about being trusted by players and in the industry as a whole, and that helps to really push home the idea that they are looking to be one of the biggest names that the industry has in the software space overall.