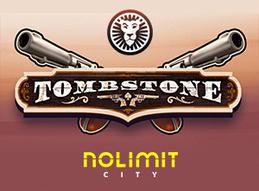 Nolimit City has just released the latest game in their lineup of online slots, but players can only find it through LeoVegas.com until May 2 as part of an exclusive deal the pair have struck.

Travel to the Wild West At LeoVegas

The game is called Tombstone, and it features a fun Wild West theme that will have players acting as the sheriff of an Old West town trying to maintain law and order while racking up cash prizes.

Malcolm Mizzi, who is the head of sales at Nolimit City, has noted that their team is "extremely proud" of Tombstone, and he believes that the game is "sure to [whet] the appetite of all seasoned players" because of its exciting gameplay.

Tombstone also incorporates Nolimit City's highly successful "xNudge" feature that players love, which allows stacked wilds with a sticky multiplier whether the reels are nudged up or down. This makes the game incredibly lucrative for players.

The Casino Operations Manager at LeoVegas, Johan Ekberg, commented that "Nolimit has created what we believe to be a wonderfully produced and very exciting game." He also said that Tombstone "raises the stakes," and the LeoVegas team believes it will be a "definite crowd pleaser."

Eyes On the Future At Nolimit City

Nolimit City is a Swedish games developer with offices in both Stockholm and Malta. The firm has been around since 2013, and their primary focus is on offering a range of customizable, flexible games to operators in order to give players a more relevant and rewarding play experience.

Their forward-thinking strategy also includes creating a catalog of games that can be flawlessly integrated into in-browser interfaces through use of HTML5, and they also ensure that their games are mobile compatible as well.

Since Tombstone is only available at LeoVegas for the time being, it's worthwhile for players to check out the casino for themselves. They have been in operation since 2012, hold licenses through Malta and the UK and have an overall solid reputation as a responsible and fair casino.

LeoVegas offers all of the best games from the top providers, and because the casino only operates with an in-browser platform, players don't have to worry about fussing with downloadable software or not being able to play on the go.