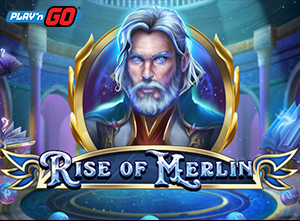 Slot experts and global games distribution powerhouse, Play'n GO, has released their latest title: Rise of Merlin, which is based on Arthurian legends of a young wizard, Merlin, and his exploits before he became the legendary sorcerer known for his supernatural abilities.

The game is of a 5x3 configuration and in it, players can collect wins in the base game by trying to match at least 3 symbols on any of ten paylines the game has.

A Lot of Features Under Wizard's Hat:

The Rise of Merlin slot comes packed with special features...

...such as the Magical Orb, the mystic symbol that can act both as a wild and a scatter! It replaces any symbol and helps create winning combos but it can also act as a catalyst for a round of bonus spins!

And while on the subject of extra spins, these are triggered when 3 or more Magical Orb symbols fall anywhere on the reels. This awards an initial eight bonus spins, but it also pays out for a number of scatters on reels. This feature can be retriggered when at least three scatter symbols land on the reels again during bonus spins, which hands out another eight spins.

Bonus spins begin with one symbol being chosen, completely at random, for the role of the special expanding symbol during the entire feature. Once the symbol is picked...

...it gets marked for visibility and then it does its magic: when it appears on a sufficient quantity of tiles after the normal paylines have paid out the award, the symbol expands and converts all other symbols on the reel to the expanding symbol.

When players are engaged in extra spins mode, they will need two or three of those chosen symbols to land on reels, depending on whether they're HP or LP.

Every time the feature is retriggered, another expanding symbol is added and the same rules as above are applied. Every icon will get its turn expanding and begins with the lowest-paying symbol. The normal lines will pay out after what is called, “the qualifying spin,” after which the first symbol will expand and pay...

...while the paylines return to normal, after which a second symbol expands and pays out and so on until all the symbols that have qualified have expanded. Extra spins can be retriggered until all symbols have become expanding.

Rise of Merlin will be released globally, across all Play'n GO operators, on June 20th.

In late May, Play'n GO premiered yet another thrilling game based on the history of the ancient world's most fierce warriors: the gladiators. Game of Gladiators, as it is called, is a 50-reel, 20-payline video slot...