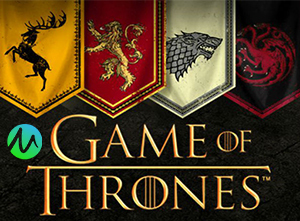 Microgaming is getting ready to fight, scheme, and vie for the Iron Throne once again.

Fans of the hit HBO show, Game of Thrones, will soon be able to go back to Westeros in a totally new online slot offering thanks to independent developer Slingshot Studios.

This deal builds on the previous relationship the casino supplier has had with HBO that started in 2014.

Back then, the company had released the original Game of Thrones game to wide acclaim from punters and critics alike.

"The Game of Thrones brand has garnered a devoted following among viewers, along with incredible media attention. We are excited to extend our partnership with HBO to supply a new Game of Thrones online slot that honors and builds on the brand’s immense popularity. In the spirit of the show, we will be working hard to deliver quality, feature-rich slot games so that players can enjoy an authentic Game of Thrones-themed gaming experience.”

The new game is marked for release later in the year and will be presented along with other titles at the ICE London 2020.

This igaming expo attracts over 600 of the most innovative companies and over 35000 yearly visitors.

They will be able to sample this new release, as well as Microgaming’s catalog of other banded releases, from 4th to 6th of February.

Taking the World by Storm

Game of Thrones has dominated the mainstream for years and is one of the most popular entertainment brands in the world. The show has attained hundreds of awards nominations and wins including 160 Emmy nominations and 59 wins. There’s also a Golden Globe nomination for good measure.

The eighth season of the show reached new heights in viewership with the season finale being watched by more than 19 million viewers across the different HBO platforms.

Fans of the show are able to enjoy a plethora of licensed products, including the previous online slot efforts from the casino supplier.

Now the fans can look forward to visiting Westeros again…

…as the new title Game of Thrones Power Stacks is joining the company’s branded portfolio.

Game of Thrones Power Stacks will feature many of the fan-favorite characters from the groundbreaking series, giving punters a chance to relive the best moments from the show that has recently ended.

There’s no shortage of popular characters in the developer’s portfolio, however. Just recently, the company has announced they will be continuing the collaboration with Edgar Rice Burroughs Inc, the owners of the Tarzan brand.

More about the Brand

Microgaming is one of the largest online casino suppliers in the world with hundreds of games in their catalog. They also operate the largest progressive jackpot network in the world.

Having been an online gambling pioneer since 1994, the company is still going strong with many new releases.