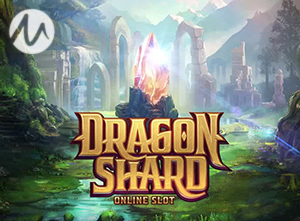 Are you ready to witness the elemental forces clash? If the answer is positive, the fantasy-themed Dragon Shard release is a must-visit destination. The latest creation by Microgaming and Stormcraft Studios…

…is a unique journey through a mythical realm, packed with numerous dynamic features which change the course of the game adding more action to this 5x5 video slot with 40 paylines.

The creative team behind hit creations such as Agent Jane Blonde Returns and Fortunium teamed up with the always-innovative Gods of Gaming to provide followers unique experience and level it up to the highest possible extents. To start with, the mighty Win Booster™, which has the ability to transform Mystery Symbols…

…into only wilds and high-paying symbols. Furthermore, it empowers all winning lines to pay BOTH ways. Moreover, Mystery Reels™ can bring a certain number of additional rounds, increasing winning chances even more. Extra spins are then awarded when further scatters land during the bonus feature. The logic outcome is an extended adventure through this epic and immersive world.

Battling to claim the arcane powers of the Dragon Shard, the Fire Queen and Ice King can appear throughout the game as high value stacked symbols. Moreover, all other shimmering icons, including the King and Queen’s fearsome dragons…

…are double stacked. Having all the gameplay and aesthetics so carefully planned inevitably brings players the chance to fill the reels with five-of-a-kind wins. In addition to this, the creation is fully optimized for a premium portrait gameplay experience on mobile as well.

Commenting on a unique opportunity to cooperate with such a gigantic partner like Microgaming, Terence Igesund, Executive Producer at Stormcraft Studios, is positive that this creation will level-up the players’ experience. As he pointed out:

“Crafting the magical world of Dragon Shard has been an immensely exciting endeavor for us at Stormcraft Studios. We carefully integrated successful and inventive game mechanics with a relatable fantasy theme, completing it with beautifully rendered visuals and an epic soundtrack. We’re looking forward to welcoming players into the magical realm of the Fire Queen and Ice King, and providing them with thoroughly entertaining gaming experience.”

The cooperation with a talented team such as Stormcraft resulted in a release well-packed with features. Jagoda Barber, Head of Games at Microgaming is certain that these actionable implementations will result in an increased number of consumers. She commented as follows:

“Dragon Shard is another exceptional addition to Microgaming’s innovative slot portfolio from the talented team at Stormcraft Studios. They have realized a visually and aurally immersive world of sword and sorcery, which particularly shines in portrait mode on mobile. The game’s feature set is just as deep and rich as its presentation, with the Win Booster™ further enhancing the power of Mystery Symbols and Mystery Reels™ in free spins, which offers excellent win potential for any player lucky enough to land five scatters entering the bonus, particularly if the Win Booster™ is enabled.”