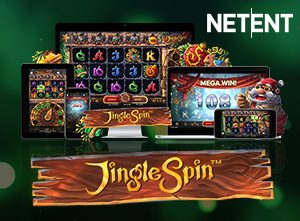 The latest title to be released by Net Entertainment is Jingle Spin. This video slot offers a great-looking holiday time with lots of opportunities to get paid that tie directly into the layout and presentation of the game.

There are supposed to be elves that help Santa build toys, but in this game, you'll have dwarves instead. They're up above the reels sitting on a shelf, and there's another off to the side. Wild symbols coordinate with the ones above the reels to give you chances to pick up random features. This can include spreading wilds, free spins, instant coin wins or a random pick from the three.

We think having random features like this is a pretty fun departure from the way that they're almost always activated with scatter symbols in other games. This shows that NetEnt has cared about both the visual appeal of this title and the gameplay mechanics, which is pretty typical for them, and it also shows that they wanted to stand out from the standard ways of doing things.

The holiday season is generally seen as one of the, if not the, most busy time of the year for online slot fans and software developers. This is because there are so many people with time off from work and other obligations that a significant uptick in the amount of time spent enjoying these games can be observed. Along these lines, there are often some big releases that come around this time of year.

Carving Up the Competition

Net Entertainment has had a pretty incredible 2018, which is so interesting because so many industry figures were wondering how they were going to top their 2016 and 2017 after building so much momentum. They've somehow managed to do it, and with the release of the Jingle Spin slot, they're winding down this year and preparing to shift into another gear in the new year. We don't doubt one bit that they'll be able to do it and push the envelope even further in 2019.