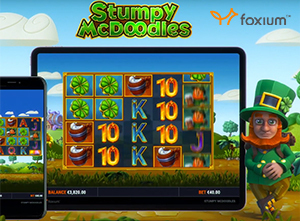 Tallinn-based developer, Foxium, is presenting its newest game – Stumpy McDoodles. It’s an Irish folklore-inspired offering with a ton of features.

The developer is calling it a never-ending party and asking punters to just jump in and have fun.

…in the house that is shaped like a cask of ale. Here Stumpy and his fairy-partner Penny are holding an ongoing party to lead travelers to massive riches.

Under a bright blue sky, green hills roll and rainbows cascade. Each one has a pot of gold, so better hurry up and claim it for yourself.

Company CEO Åke André had comments about the release

“At Foxium we believe in making every concept and every story our own, which is why Stumpy McDoodles stands out from the crowd of other Irish-themed games,”

“As well as being another opportunity to deploy our game-changing FoxifyTM feature, Stumpy McDoodles is also the latest showcase for the strong creative design, characterization and gameplay that make Foxium’s slots so sought-after by players in a range of different markets. “

Packed with features and fuelled by a thigh-slapping soundtrack, Stumpy McDoodles is the party that never has to end.”

The developer is well-known for imbuing their games with intricate stories and this new offering is no different.

Punters will get to known Stumpy through expressive animation that conveys a lot of personalities.

And all this ties into the many special features that are present in the slot title.

Since Stumpy is a very excitable fellow, he likes to throw pots of gold randomly in the base game. When the pots hit the reels, they reveal multipliers (2x to 5x) and add between 3 and 8 random wilds to the game.

This combination creates big win potential for the players to enjoy.

Extra spins are here too…

…and are activated when three scatter symbols appear. Five spins are awarded and Stumpy will keep opening those pots to reveal multipliers and additional wilds.

And if the player gets a narrow miss with only two scatters appearing, there will be one respin for a chance to still trigger the bonus game.

Just like in most games from this developer such as The Great Albini players can access the bonus game immediately by expending 50x their current bet.

There’s also the Foxify option which will double the multipliers both in the base game and in the extra spins mode.

The Estonian developer was founded in 2015 and their games have since become a well-known presence in many online casinos around the world.

Their focus is primarily on storytelling and gamification which they achieve by picking interesting themes and creating personable characters.

The built-in achievements system is the highlight of their commitment to gamified slots and it’s based on a flexible platform that can easily fit the needs of various operators in various markets.