The Basics of Online Keno 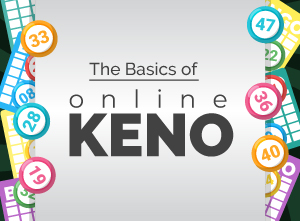 Keno is a game that is probably easier to play than it is to explain. Since it is not very hard to explain, that should give you an idea why so many people play.

Stripped to its essence, it's pretty simple - as a keno player, you pick out numbers. If the numbers you pick are drawn, you win, to varying degrees, depending on how many numbers you picked and how much you bet. If you've ever played the lottery, you'd be able to pick up on keno right away.

While it bears some resemblance to the lottery, keno is different from, say, bingo in that the set of numbers (80 of them) on the keno card is fixed and constant, not subject to random distribution on individual cards as it is in bingo. Also, players do their own "programming," so to speak, selecting the numbers themselves. That's satisfying to a lot of people, because their perception is that it puts them in more of a position of control.

Players in online keno pull up an interface with all the numbers on it, and can make any number of selections (at least 10 and usually up to 15). In the regular casino game, they would those numbers with a crayon. But in the online version, it's just a matter of pointing and clicking. The player has options - these include the level of wager and the number of plays to make with the set of numbers he or she has selected (the number varies according to the casino). This would be akin to the "multi-race" card one can purchase in a regular casino, which allows play on the same numbers for up to 1000 consecutive draws. After making those decisions, the player clicks a "play" button and almost immediately the online casino's internal random generator draws the numbers.

All of it takes place right in front of the player. There is no need to even keep track of what matches you have. The program will mark the numbers it draws with an "X" and circle your selections that matched. In the online game, you're told right away if you won, and how much. There is virtually no chance of error.

I won't lie to you, you're usually not going to match enough to be a long-term winner. But if your ship comes in, that's what makes it all worthwhile.