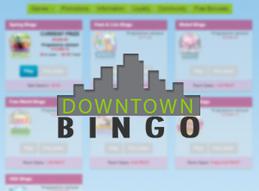 One of the things that holds some players back from being able to enjoy online bingo for longer periods of time is that there are only a few different ways to play. Add in a few different payout structures and card patterns, and you're really left with between 6 and 12 different ways to get in on the action in most cases at most sites. Downtown Bingo is curing this issue with five new bingo titles that have been added recently.

Extra Balls and Other Options

It's very frustrating for a bingo game to end when there's only one ball left that you need for a payout. That's why all of these five new games have extra ball options where you can pay a set price to see extra balls drawn. They all give you the option to get between 10 and 13 extra balls, and the price for taking them varies based on your chances of winning.

Downtown Bingo is a part of the Betting Partners group of online casinos and bingo rooms, and it's the sister site to names like Bovada. They have a strong offering of bingo games in addition to other diversions like online slots, and that gives players plenty to get excited about. To give you even more value, they have great promotions as well, making them a great, one-stop shop for bingoheads.