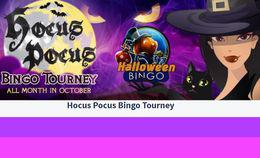 October is the beginning of the holiday season, and it all starts with Halloween. People love this holiday because it gives them a chance to dress up and decorate their houses in spooky ways, and CyberBingo is celebrating as well. They are hosting an online bingo tournament based on giving players chances to earn spots on the leaderboard for the entire month, and it's a great way to get extra action for your play.

Getting in on the Tournament

To join in on this tournament, you'll need to play the special Hocus Pocus games that show up in the Halloween Bingo room only. Every hour, there will be a new game available, and they only cost $0.50 apiece. When you win one of these games, you get a tournament point that puts you on the leaderboard, and at the end of the month on midnight of October 31, 2016, you'll get $1,000 cash if you are the person in first place on the board, which comes with no strings attached.

The top 20 players on the leaderboard actually earn prizes. Second place gets a solid $500 bonus, and third earns a $350 bonus. Fourth is good for $250, while fifth picks up $150. Places sixth through tenth will get $75 apiece, and if you land on the 11th through 15th spots, you'll earn a $50 bonus. Finally, all players who show up from 16th to 20th will be given a $25 bonus as well. This is a total of $3,000 in prizes that they are giving away, and it's an awesome way to add some extra value to your sessions without breaking the bank this October.

CyberBingo is one of the longest-running online bingo rooms in the world. They accept players from all over, including from the United States, and they have a reputation for a strong community and a staff that really cares about their players. With frequent promotions like the Hocus Pocus tournament that give players serious winnings on top of what they would normally expect to earn from the games, they've also made themselves known as a top spot for players who want to maximize their value and keep their bankrolls topped off.