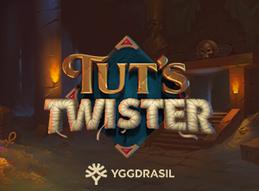 The newest release from Yggdrasil Gaming comes in the form of Tut's Twister, a video slot based on HTML5 that offers a theme based on King Tut coming back from the dead and unleashing his magic on the reels to help you run up some serious treasure of your own. This title is gorgeous with 3D graphics, and it's packed full of innovative features that keep the gameplay fresh and action-oriented.

The name of the game ties into the main gameplay feature: Tut's Twister. If you get at least two wild symbols on the reels, Tut will unleash his magic and create a huge sandstorm. A large reel of wilds will land, and this vortex will consume wilds that are on the game's reels over and over as it gives you multipliers across a set of re-spins. At the end of the feature, all of the consumed wild symbols can be dropped back onto the reels to give you chances to score one last big set of payouts before you get back to regular gameplay.

Replay value is always an important issue with any new slot release, and this title has it in a major way. One of the mechanics it uses to improve the replay value centers around collecting hieroglyphics. As you collect them, they will save across your gaming sessions, and they help you to unlock new aspects of Tut's spells that will give you even more chances for wins. The basic idea is to put players on bigger winning streaks the more they have played and collected these symbols.

Yggdrasil Tearing It Up

Yggdrasil Gaming has been having quite a year. They've released a number of slots that have gotten pretty popular, and they've also been working towards revamping a number of table games to give players new twists on old favorites. With Tut's Twister, you get to see their graphical prowess in action in a big way, and the gameplay elements with substantial replay value are also an important part of the experience. This shows that they're thinking long-term for players, which is the type of approach that has gotten them to the level of popularity they're at today.