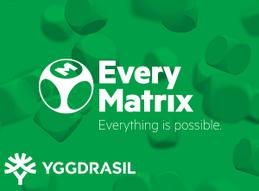 Distribution deals are a pretty important part of the way that the online casino industry is set up right now. There are game developers and platform operators, and the developers mostly get distribution through deals with these platform owners.

A new deal between Yggdrasil Gaming and EveryMatrix has created a win-win situation where the former will have their games offered on the latter's platform along these lines.

One of the aspects of this deal that's important is that Yggdrasil's first table game called Sonya Blackjack will be available as a part of the distribution. That's on top of their full selection of online slots, which is the main attraction here. They've been coming out with more titles each year without compromising on quality, and many experts believe their quality levels are actually increasing over time along with how many they're coming out with each year, so it's a good time for EveryMatrix to jump on the Yggdrasil bandwagon.

A key component to deals like this one is that they're necessary for the software developers to get their games in front of players. With that having been said, that doesn't mean that the operators have all of the leverage. Without great games, they'd be dead in the water as well, so these type of content distribution agreements have to be win-win.

The players also win with these deals because of the increased access that they get to high-quality titles. That's one of the parts of these types of business deals that often gets overlooked, but it's important to the industry as a whole.

This deal wouldn't be possible without Yggdrasil consistently coming out with great games that are very much in demand. They have lots of popular releases each year, and this puts them in a position to have quite a following. The more players that they can get behind them in this way with greater distribution, the more momentum that they pull together, and the more aggressive they can be with releases and expansion in the future.

This company has made a hard push in the direction of the top of the industry, and their success is very much tied in with that.