Video Poker and Video Keno Surveys by The Wizard of Odds 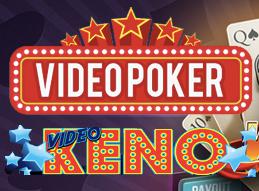 The Wizard of Odds himself, Michael Shackleford, surveyed the scene at Las Vegas casinos in search of the best returns on video poker and video keno. Not only did he have to play a whole of games to get the job done but he compiled the results in a comprehensive list on WizardofVegas.com with each location ranked and graded by the average return to player (RTP) percentage. In an exclusive interview with our network site, LatestCasinoBonuses.com, he covered the games played, the results and much more.

When asked about how he came up with the idea to conduct these surveys, Michael explained: "It is my calling to make better gamblers out of the teeming millions. While I spend most of my time explaining the best way to play the hundreds of games out there, that is actually only half the battle. The other half is game selection. In other words, finding the games with the best rules. For example, just choosing 3-2 blackjack over 6-5 will cut down the house advantage by about 2/3.

"Through the years, I've learned most gamblers don't play often enough to warrant learning what the good rules are and how to play them. However, I am frequently asked by such players, " Can you just tell me what are the best casinos to play at and let me play my own way?" That's fine. These surveys were conducted for those machine players who need a little help choosing which casino to play during their trip to Vegas."

When determining which games to base the survey on, he settled on 25 cent machines. Michael randomly selected games in various areas of the casinos and avoided those boasting loose payouts.

In terms of video poker, he stuck to basic five coin Game King machines without all the bells and whistles found on multi-line variations with multipliers etc. The scope was much wider with video keno as all types were included with the exception of Top Bottom keno.

The Results - Best and Worst

Encore ranked as the best return for video keno with 93.52% return while Casino Royale and Venetian came in dead last with 87.47% and 87.15% returns respectively.

When asked about the results, Michael was surprised at "...how well the Encore and Wynn, which are sister properties, did in the video keno survey. As I'm sure most readers know, these are two of the more luxurious properties in Vegas, or anywhere. To make a generalization, the nicer the casino, the tighter the machines are. However, this was a surprising exception. Otherwise, what was shown in my old slot machine study pretty much held true with these surveys -- the loosest casinos are the locals' properties off the strip, followed by downtown, and finally the Strip. Of the Strip properties, as a rule of thumb, the nicer the property, the tighter the machines."

Where is Michael Now?

As the founder of the Wizard group of sites, he remains in the biz as a valuable contributor on the writing team with new owners, LCB and its network of sites. The Wizard is still around conducting surveys, calculating odds and fighting the good fight to keep casinos honest. He was told by a Nevada gaming agent "that the information for each casino was kept in a spreadsheet. So, I invoked the Freedom of Information Act to obtain that information." As the song says, "I fought the law and the law won". (A video of the hearing is on YouTube)

"My side never got a chance to make our case. The judge asked a few questions and threw the case out of court. It goes to show, in my opinion, who really runs things in Nevada. Contrary to what some people in high places say (*ahem*), I think there is a necessary roll of the press to keep the government and private sector honest and accountable."