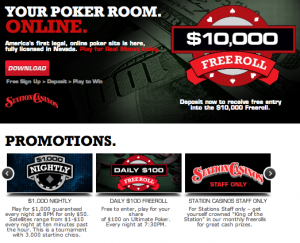 UltimatePoker.com went live this morning at 9am Nevada time, after given the thumbs up from the state’s gaming authorities. While the launch is sending waves of reaction throughout the United States, its online poker games can only be played on computers and mobile devices located within the Nevada borders.

“The technology was acquired and initially developed by a U.S.-based company with a completely clean regulatory profile,” said Tobin Prior, CEO of Ultimate Gaming in a Review Journal article. “Being the first to launch is an honor, but it also comes with a big responsibility. Everyone will be watching us.”

With online poker games having buy-ins starting at just a few pennies up to $100, Ultimate Poker will provide something for every type of poker player. It will feature limit and no-limit Texas hold’em poker through single-table cash games, multi-table tournaments, and sit-and-go events.

The first 30 days of the launch are considered to be a a beta test by the Nevada gaming authorities. Reported errors, if any, have the ability to be fixed immediately, and a report will be provided at the end of May to the gaming authorities that will indicate wagering activity, customer feedback, and other rollout statistics.

Those non-Nevada-based players can register and deposit money in advance of their visit as long as they are at least 21 years of age.

UltimatePoker.com has enlisted WSOP champion Antonio Esfandiari to promote the website. Esfandiari recently won the largest World Series of Poker jackpot of $18.3 million last summer. As the first online poker site to reach the market, Ultimate Poker owes a lot to the fact that it owns and controls its own technology.

While the launch is certainly a milestone in the realm of US poker, it is the first of many ground-breaking moments in Nevada. Since Governor Brian Sandoval lead the change to allow the governor to enter into compacts with other states to increase the online poker player pool, there will soon be a push to increase player liquidity, a necessity for the viability of any online poker room. And Ultimate Poker is the first of several online poker site launches we’ll see in the coming months.